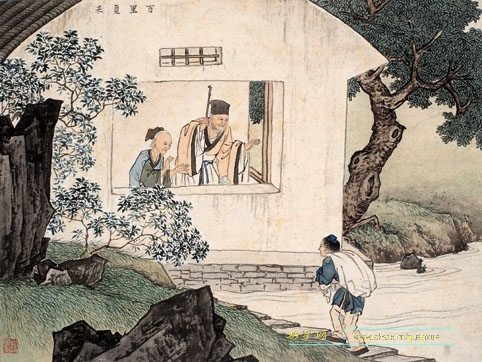 Zhong You, with the alias of Zilu or Jilu, was a man in the State of Lu during the Spring and Autumn Period. He was a favorite disciple of Confucius. He possessed frank and courageous characters, and was very filial.
仲由，字子路、季路，春秋时期鲁国人，孔子的得意弟子，性格直率勇敢，十分孝顺。
At an early age, as his family was poor, he often took wild vegetables as food, but still he carried sacks of rice for more than a hundred li to raise his parents.
早年家中贫穷，自己常常采野菜做饭食，却从百里之外负米回家侍奉双亲。
After his parents died, he became a high-ranking official, and then was dispatched to the State of Chu, followed by a hundred chariots and with 10,000 zhong (ancient unit of capacity) of grain in store.
父母死后，他做了大官，奉命到楚国去，随从的车马有百乘之众，所积的粮食有万钟之多。
Sat upon many layers of brocade mattress and enjoyed sumptuous feast before rows of tripods of food, he often missed his parents and sighed:
坐在垒叠的锦褥上，吃着丰盛的筵席，他常常怀念双亲，慨叹说:
"Even if I am willing to go back to the times when I ate wild vegetables and carried rice for more than a hundred li to raise my parents, how could that be possible?"
“即使我想吃野菜，为父母亲去负米，哪里能够再得呢？”
Confucius praised: "You took care of your parents, which can be commented as doing one’s best during parents’ lifetime and missing parents after they depart out of this world!" (Zhi Si of Confucius Family Instructions).
孔子赞扬说：“你侍奉父母，可以说是生时尽力，死后思念哪！”（《孔子家语·致思》）