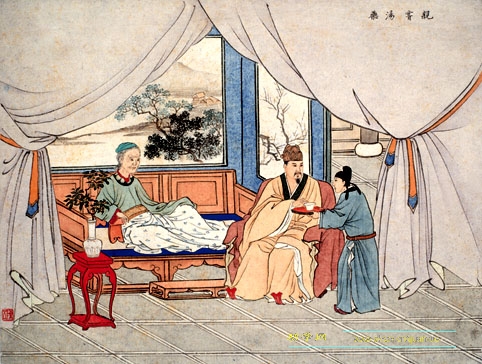 During the Western Han Dynasty in China, after its founding patriarch Liu Bang died, the throne came by succession to his son, "Liu Heng".
西汉年间，建国皇帝刘邦死后，他的儿子刘恒继承了王位。
He earned the name Han Wendi, "The Learned Emperor of Han". As a ruler, he practiced vigorous, just government, and he loved the citizens, moving and inspiring them to self improvement through education.
他自称汉文帝，即“有学问的汉朝皇帝”。作为国家统治者，爱民，全身心的鼓励老百姓通过教育来兴旺人丁。
State business was extremely complex and demanding of time, nonetheless he still found time to serve his mother with respectful, filial devotion. He was neither careless nor tardy in his treatment of his mother.
尽管国事繁忙，他仍然侍奉母亲从不懈怠。
Once the matron suffered a serious illness and Han Wendi, as soon as he had completed the various governmental matters , would immediately leave the state chambers and return to his mother's bedside to nurse her with tender concern.
母亲一次严重的疾病，汉文帝放下公事，立刻离开朝廷回到母亲身边照顾母亲。
She was sick for a full three years, and his care was constant and untiring. He waited on her by night and day throughout her convalescence, without relaxing his vigilance in the least. He never grumbled or resented the toil and tedium.
母亲卧病三年，他常常日夜照顾母亲，衣不解带。
The Emperor's care of his mother was thorough to the last detail. He would wait by her bedside without closing his eyes, often forgetting to change his robes for long Periodst afraid that he might be remiss in his nursing care.
汉文帝照顾母亲非常细心，在母亲床边，目不交睫，以至于常常忘记换衣服。
As soon as the servants had prepared any dose of medicine, the Emperor would first sample the mixture himself, to make sure it was neither too hot nor too weak. As soon as it was fit to drink, he would spoon-feed the mixture himself to his mother.
当仆人准备好了药后，他亲口尝过后才放心让母亲服用。
Many years passed, and the Learned Emperor nursed his mother throughout.
多年以来，他都坚持照顾母亲。
He earned the praises of all the citizens. An outstanding leader, he was also a most unusual, filially-devoted son, and set the standards of behavior towards parents.
他深得民心。他不仅是位优秀的皇帝，还是个非常孝顺母亲的儿子，成为孝顺父母的典范。
The people of China respected him, and accepted his teaching. They were deeply influenced and transformed by his model of virtue.
中国人钦佩他，向他学习。他深刻的影响影响着孝顺美德的继承。
The people in their turn, practiced filial respect towards their parents, and treated them well.
人们应该学习孝顺的尊重和善待自己的父母。
The Learned Emperor's name, Han Wendi, has passed down through a thousand ages to the present--people still admire his model of virtuous, selfless conduct.
孝子汉文帝，虽已逝去，人们仍然敬仰汉文帝善良,无私孝顺母亲的行为。