All their windows were dark. Quiet snow filled the air.

All the Whos were all dreaming sweet dreams without care.

When he came to the first little house on the square.

"This is stop number one," the old Grinchy Claus hissed,

And he climbed to the roof, empty bags in his fist. 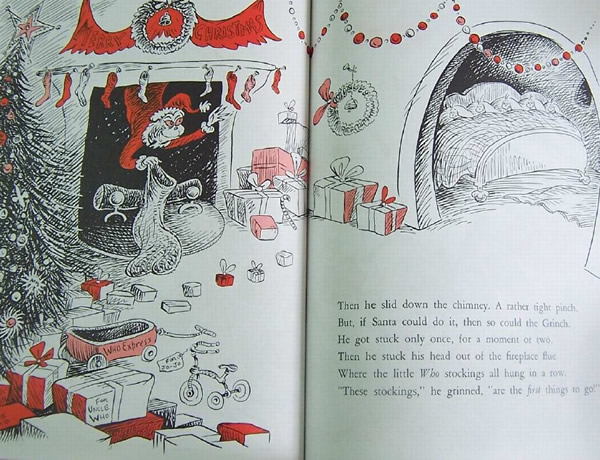 Then he slid down the chimney. A rather tight pinch.

But, if Santa could do it, then so could the Grinch.

He got stuck only once, for a moment or two.

Then he stuck his head out of the fireplace flue.

Where the little Who stockings all hung in a row.

"These stockings," he grinned, "are the first things to go!"

Then he slithered and slunk, with a smile most unpleasant,

Around the whole room, and he took every present!

And he stuffed them in bags. Then the Grinch, very nimbly,

Stuffed all the bags, one by one, up the chimney!

Then he slunk to the icebox. He took the Whos' feast!

He cleaned out that icebox as quick as a flash.

Why, that Grinch even took their last can of Who-hash!